I still haven’t rounded up the highlights of 2014 in a post.

I still haven’t solidified (or come anywhere close to solidifying) my goals for 2015, in a post or elsewhere.

I know some broad things I’d like to work on this year, but that’s it. And January is passing by, and that’s okay.

If these goals come together by the end of the month — that’s okay. If I don’t know what I want to do until February or March, but I have goals that were developed thoughtfully and that I’m able to tackle…that’s wonderful. That’s the only thing that needs to happen.

Lara Casey said this better than I did above in the introduction to her 2015 goal-setting series:

“You can microwave some goals and have a pretty list by January 1, or you can dig deeper and set goals that matter to you…you can pray hard about them and really weigh whether or not they are the best use of your time. You can set goals that are twenty levels below the surface, where the fiery good stuff lives, or you can just make resolutions that get forgotten and tossed aside come February 1.”

I do have three very broad goals that I’d like to shape my year around (and that Christine at The Hipster Housewife was kind enough to put them on paper for me): 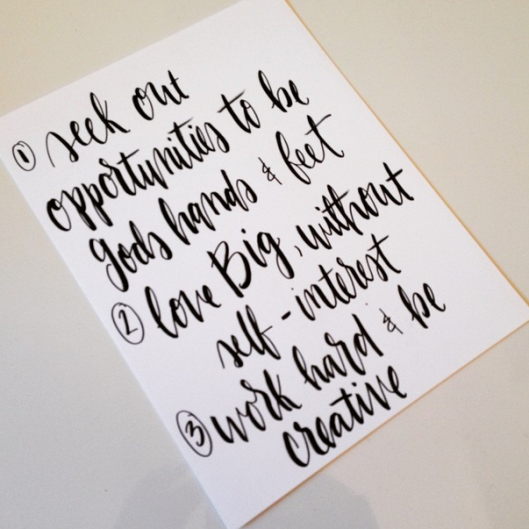 So those are my big, overarching goals for 2015. I’ll be back — maybe soon, maybe later — with more detailed lists on what I’d like to improve in the areas of health and work and finances and service and social life :)