That’s a paranoid fantasy you have when, in reality, you have chronic migraines. Or you need new glasses. Maybe you are stressed.

I thought all of those things over the last three months, as my headaches gradually ramped up in intensity. First it was this is annoying, better take a Tylenol, then hey, I’m just going to close my office door and turn the light off, okay? Then I stopped being able to get out of bed, and learned I couldn’t work from home if I couldn’t stand to look at a screen. The headaches were joined by a steadily increasing nausea — we’re talking throw-up-all-over-yourself-in-Atlanta-rush-hour nausea. When it reached the point that I couldn’t keep down a sip of water and a Zofran, I decided it was time for the ER. 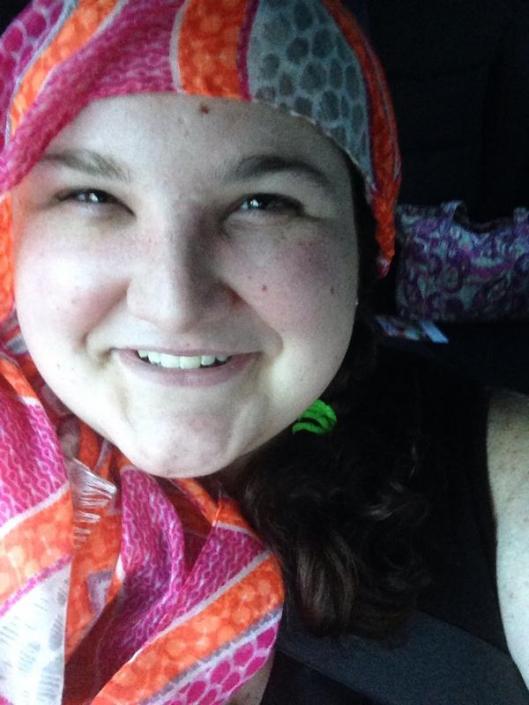 You don’t lose a ton of hair for a frontal lobe tumor, but the scar is gnarly enough to scare innocent library patrons, so head scarves it is.

So there was a midnight drive to the emergency room, during which my brain felt like it was wrapped in cotton. Then a prompt break to throw up in the flowerbed just outside the door of my car (sorry, Gwinnett Medical Center). Then hours of waiting, followed by a CT scan, and finally information started to trickle in: There was swelling in my brain. Then there was an MRI, and the information solidified.The swelling was caused by a tumor.

Of course, doctors don’t say tumor. They say mass. Beyond that, they dance around the subject. They don’t tell you how large it is. They certainly don’t tell you it’s large enough to shift your brain. They don’t mention that — barring some steroids and an almost-immediate operation — you’ve seen your tiny walk-up apartment, your usual seat on the train, your childhood neighborhood, your parents’ dog for the last time.

One nurse slipped and told me I know it’s a lot to handle…but I didn’t know what I was handling. I called my mom, who’s a nurse herself, and asked her to explain. I whispered into the phone, my voice pitched toward panic, “They keep saying mass. What is that? I don’t know what that is.”

My understanding arrived along with my parents, who’d spent the early morning hurtling down dark interstates, worry metabolizing into gas-driven speed. “We’re talking about an operation today?” my mom asked. The nurse’s “yes” pierced, barely, through my pain-medicated fog.

Later, my parents told me the doctor had pulled them aside, showing them the images of my invaded, shifted brain. “Look at that,” he told them. “Look.” My dad said he sounded afraid.

The first thing, after any major surgery, is pain. It hurts, and it hurts for a long time. I wanted to describe it. I sat in my bed floating in morphine and wrote long mental segments of this blog post, soliloquies on pain.

But I don’t think anyone really remembers how they hurt, given any remove of time. I can tell you that, compared to the other surgeries I’ve had, brain surgery pales in comparison. And I can tell you that, despite the paling, it still hurt enough that for days, there was no such thing as boredom. All I could think about was pain in varying degrees.

But that’s all I remember. I couldn’t tell you what it felt like.

Eventually, the pain eases and you settle into some comfort, spiked with little flashpoints of anxiety, about real and inconsequential things alike. I quizzed myself: How do I pay my rent next month? And, What happens when the staples come out? Does that hurt? Oh god, I bet it hurts.

When you’re sick, you’re supposed to be beatific. I don’t do that well.

As soon as there was room for anything else but pain, I was irritable and difficult and whiny and petty. A lot of it stemmed from the medication you take for the first few days after surgery, which, in addition to keeping swelling down in your brain, gives you the perpetual feeling that the entire world is conspiring to make you feel gloomy and angry and inconvenienced and sad.

There were also the dreams about dying. Every night, I died in another dream — drowning, gunshots, the works. (For some comic relief, I’ll admit that in one of the dying dreams, my friends Michael, Hannah and I were the Pretty Little Liars, and we were being stalked by A. When we were finally cornered, we learned that A and her minions only wanted us to hand over editorship of The Appalachian. I was okay with it, but Michael and Hannah refused, so down we went.)

My mom told me a few days after my surgery that if I’d stayed home instead of driving to the ER, I likely would’ve died that night, or maybe the next. Most of my reaction to that could be distilled into two questions, which have echoed and echoed and echoed in my mind: So why am I alive? And then, Who’s to say my luck holds out?

My tumor was not benign. There’s a chance that, in six months, I’ll need radiation and another surgery. It’s likely my luck will hold out, but it’s not a guarantee.

But despite that, and despite all my irritability and petty whines, there has been so much good. Love poured out in all directions, more than I can describe. The people of my home church, who rose up and loved and cooked and prayed. The nurses who took us aside and put their hands on our shoulders and talked to God. The friends who made six-hour drives and ate peanut-butter sandwiches so they could come see me, and those who offered their own expertise, desperately needed, on the strangeness of having your brain sliced into (or, in my brothers’ case, sitting in the surgical waiting room while all the brain-slicing occurred) without being old enough to rent a car.

There were the cards full of signatures, day after day, from people who love me in a little town in the foothills of North Carolina, one of the strangest, best slices of my life so far.

And there has been the presence, all throughout, of a God who loves me, who created my brain and my skull and my surgeon’s hands. Why am I not more afraid? I have asked myself over and over again. And I’m not because I know. I know who holds my future. And given the chance, I would not wipe this experience away, would not choose to avoid it. The depth of assurance that you feel in the lowest valleys is more than worth it. Being alone in a curtained-off room in the ER hearing the word “mass” and barely knowing what it means — moments like that become joy when they bring with them the strength of His presence and the privilege of His closeness.

I can feel my life coming back, in inches, in centimeters, in something smaller. And I can feel the stirrings of hope. And I know, even when I can’t feel it, even when I am the absolute opposite of beatifically ill, that I am so lucky to be here. To have more chances.

To breathe in, and then out. To keep going.

5 thoughts on “When it’s actually a brain tumor.”