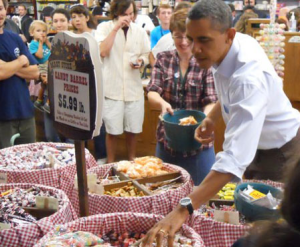 He didn’t do much. He picked up some Halloween candy, grabbed lunch at my favorite sandwich place, and – bizarrely enough – stopped into this crazy little consignment store that makes you dance for a discount. Then he made his way down the mountain to Wilkesboro, to make a speech about the Jobs Bill against the backdrop of the dying North Carolina furniture industry.

It was, however, a huge deal for us. My Twitter timeline and Facebook feed both exploded. I had reporters and photographers running around acting like presidential correspondents. People talked about it for days – did you meet him? Did you see him passing through?

Among everyone I met who was lucky enough to be on King Street – our quirky main thoroughfare – when the Commander in Chief passed through, there was an astonishingly common refrain. Everyone tried to convince whoever would listen that the president paid some kind of special attention to them. The president waved at ME, they said with smug grins. He smiled right at me. He looked right at me and winked.

And that, to me, sums up what people want from their governments.

Obviously, government and policy are complicated and convoluted and there are so many thorny, difficult, essential discussions people need to have with their leaders.

But when it comes down to what they want – to their core desires and dreams and goals?